I don’t make it a habit of writing idiotic titles like the one above, but one must bow to the almighty search bots. My pet peeve is ads that state “the (insert here) you love”. How do they know if I love comfort, or rubber, or burlap? Impertinence, say I.

I am listing beautiful plus-size vintage dresses on (ugh) Ebay, as well as Christmas gifts for milady. And many have FREE shipping. Here is a small selection to whet your appetite:

A beautiful gold satin flocked silk dress for the taller woman, XL B45

From the 1930s, a feminine flowered cotton dress, M/L with a gored skirt and large Bakelite buttons:

A stunning 1940s black silk dress, also for the taller woman, with a wide v-collar front and back, and black button trim around the collar and along one hip:

A glorious turn of the century Italian cameo ring, in a rare Navette setting, on sale: 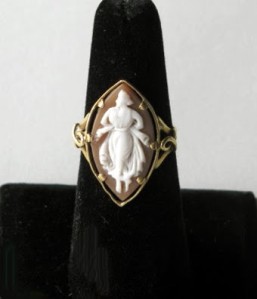 Soon to be listed, this dazzling rhinestone-front vintage maxi-dress, perfect for holiday parties!

Do have a look at my store, Elisa’s Bodacious House of Style, for more precious, one-of-a-kind finds. Oh, and do me a favor–buy them.

It is that time of the year in which we pay tribute to all we are grateful for. I am not above that sort of thing, so here are some of the things I am grateful for:

May you all have a wonderful holiday weekend, surrounded by as few relatives as possible. Personally, your faithful correspondent is going to stuff herself until she’s ready to explode, and NEVER say, “Oh dear Lord, I need to go on a diet!”

Fat discrimination never ends, does it? Why is it news when a fat person dies, when millions more are dying of lung cancer? It is because “Man Dies Of Lung Cancer In Recliner” doesn’t make for a snappy headline?

Your faithful correspondent was outraged to read today in the Huffington Post that Lincoln University has instituted a policy that not only do students have to take a mandatory physical fitness class to be considered eligible for graduation—but also must have a Body Mass Index of under 30! Otherwise they will not graduate.

I have to admit that I have never cared enough to find out what exactly BMI is or why it matters so much. (“The Biggest Loser” uses it, but anyone who appears on that farce is already a loser.)

Not only is this policy discriminatory toward those whose body mass is greater than the approved amount; all of the two dozen students who will not graduate are African-American.

The name Lincoln University has become a joke. What would Abraham Lincoln make of this idiotic, inequitable policy that affects so many young people who have studied and worked for their diplomas? Is the university letting anorexics graduate, or do they have to have a BMI above 3? Somehow I think the deluded officials responsible for this monstrosity don’t care which students have bulimia (after all, they tend to be more photogenic, even if they faint a lot).

In turn it links to a suitably judgemental article by an African-American woman criticizing the students for being overweight. So comforting to know that this sort of discrimination is embraced by the African-American community. Don’t they have problems enough??

Shame on you, Lincoln University! Shame on the press outlets that publicize this sort of article with shots of bulging waists.

Mon Dieu, I have to go and have my maid dab my temples with eau–de-cologne. And than I shall dine on a large breakfast of bacon, eggs and buttermilk biscuits to show my solidarity (and because it is delicious).

On (ugh) Ebay, I am having a coat sale: COAT-A-RAMA! Gorgeous coats from all seasons, including coats with broadtail collars, 1980s coats, 1940s coats and fur capes and stoles, in sizes from 14 to 20! Plus size lovelies can finally find the coat of their choice. 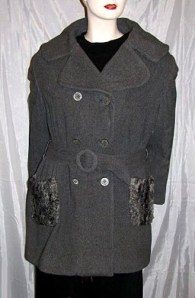 More coats will be listed in the next two weeks, so checking back to my store! Why look good when you can look BODACIOUS?

I simply HAD to share this video with you. Generally large-scale causes don’t interest me, and I’m awfully tired of all of the ceaseless baying about breast cancer.

However, the staff at Providence St. Vincent Medical Center in Portland, Ore put on what they called “The Pink Glove Dance.”

From administrators to nurses, cleaning crews to surgeons, everyone threw on a pair of pink gloves and got down in the spirit of raising awareness for breast cancer. It is worth it to watch to the end (and by the way, it shows beautiful plus-size women shaking it, always a good thing in this writer’s mind). I do hope you’ll consider watching!

In the meantime, virtual hugs and kisses to you all. (It’s so much simpler when I don’t have to touch you, isn’t it?)

Forgive my long absence! An emergency arose and I had to deal with it. Do not worry, John Cusack will be fine ere long, but I am not so sure about Patricia Arquette.

In any event, a blog-thing such as mine is “content-driven” and I haven’t had the time to create “content.” However, a person who had emailed me prior to this connected me with his very odd project–a series of what he calls “bacon portraits” of the entire cast of House MD. His slogan is, “Everything is better with bacon!”

So in the spirit of pork-lovers and Huddy shippers everywhere, I present to you a work by a person who only wishes to be known as “WJ”:

HOUSE AND CUDDY: A LOVE STORY WITH BACON
Because everything is better with bacon!

One fateful day, Cuddy couldn’t help noticing (and wanting) House’s huge pizza bacon burger sandwich.
Cuddy: “That is amazing. It would give heart attacks to the entire cardiac unit.”
House: “I bet you never knew I had so much meat, Cuddy.”
Cuddy: “Charming.”

But it was true. She couldn’t stop thinking about House, or the bacon, or how juicy both House and his sandwich looked. But how to get House to jump her without arousing his suspicions? She only wanted to arouse House.

House’s meat continued to haunt her…so she asked him to help her with a terrible rash, which could only be cured by being “rubbed with bacon grease.” House thought it was kind of weird. Even he had never heard of such a rash. And he knew every single disease in the universe and beyond! But hey, he could get a look at Cuddy’s a**.

So he brought a big wad of raw bacon to her office and rubbed away. It’s a toss-up as to which one enjoyed it more.

Now Cuddy’s *ss was haunting House’s thoughts. Not knowing that Cuddy was coveting his meat, House went to Wilson for advice.

Wilson: “Do you want a relationship or to get into her panties?”
House: “Either one will do. Short-term, panties.”
Wilson: “You need to make a romantic gesture, House. And don’t give her a sweater. That’s what I gave my third wife for Christmas, and we all know how that turned out.”

So, House thought long and hard about a suitable romantic gesture. Then he had an epiphany. She’d asked to be rubbed down with bacon grease. That meant that somehow, deep in her cerebral cortex, Cuddy knew she needed bacon. STAT!

The next day, he presented Cuddy with a huge bouquet of the good stuff! From the deep South, no less!

But remembering that he’d hallucinated a night of passion with her just months before, House started wondering if this was even real. He could smell Cuddy’s perfume, he could smell the bacon, but what was real and what was not? What was the meaning of life? Why was 13 coming back to the show and not Taub? What if Wilson threw him out? Maybe this wasn’t happening at all, he was sitting in his office playing with his giant tennis ball…It proved too much for House, and he collapsed.

House came to with Cuddy tenderly holding a piece of bacon to revive him, while Wilson watched jealously.
Wilson (thought): “House never gave me a bacon bouquet. Just a dumb brisket corsage. And that was when he was drunk.”
Cuddy: “House, are you all right?”
House: “What–what happened to the bacon?”
Cuddy: “While you were unconscious, I ran to the staff lounge and put it in the refrigerator. I–I couldn’t risk letting it spoil.”
House: “Bacon doesn’t spoil, Cuddy. If you weren’t Jewish you’d know that.”
Cuddy: (wishing Wilson would stop glaring at them and get of there already) “House–House, this isn’t easy for me to say. Wilson, could you excuse us?”
Wilson: “Just until I know that House is okay.”
Cuddy: (with a look at Wilson) “House, I want you to teach me about bacon. In fact, I want you to be my meat guide, to show me the wonders of being a true carnivore. I know it’s going to feel so good.”
House: “We’d better get out of here and get that bouquet, before Chase eats it.”

And so, that night, Cuddy and House shared their bacon…and oh, so much more.

And they lived happily ever (or at least for about two weeks)…BECAUSE EVERYTHING IS BETTER WITH BACON! EVEN HUDDY!

Thank you, “WJ”, for a truly strange experience. And thank you, mon cher readers, I do hope you enjoyed this, er, bizarre creation as much as moi.

Among the deluge of PR dumped into my email inbox daily, one item caught my interest. It was from a Peruvian knitwear firm, Hortensia’s Luxurious Knit Accessories. It is a tiny company, started five years ago by the mother/daughter team of Elizabeth Tola and Michelle Peglau Tola, initially with only three other knitters.

Since then, Hortensia has grown into a medium sized cooperative community of knitters that work from their homes and provide a stable income for their families. The company is very proud of what they have achieved; it allows these women to earn a good income while staying at home.

Elizabeth Tola was a well-known designer in Lima’s fashion scene of the 80’s. Her daughter Michelle studied fashion design. While in school, she entered a young designers contest sponsored by Air France, winning the first prize with a dress inspired by Andean traditional costumes. Later she came to New York to study fashion marketing at Tim Gunn’s old stomping grounds, Parsons School of Design.

Inspired by Peglau’s great aunt, Hortensia, an avid knitter raised in France and Peru, Elizabeth and Michelle decided to create a luxury knitwear line that would show the rest of the world the unique designs that Peru has to offer.

The line fuses traditional Peruvian weaving, the warmth of alpaca and European flair. The alpaca is dyed using non-toxic materials. Each piece is entirely handmade by skilled knitters for whom knitting has been a livelihood for generations.

As Michelle Peglau Tola wrote to me, “From the mountain ranges of Peru, Hortensia is designed for active, stylish urbanites and knitwear lovers everywhere.”

Your faithful correspondent loves to blend fashion and activism, and the fact that one can do good simply by buying something. So much less labor-intensive than other forms of activism and yet so rewarding, don’t you think?

Find their beautiful designs at:
http://www.hortensiahandmade.com/

Asymmetrical sweater wraps in lush earth tones and deep jewel hues, eyelet sweater dresses in delicate combinations and intricately knit hats are pure glamour. Sold at high-end boutiques and department stores, such as Oak and Henri Bendel, their line of hats, scarves and sweaters are a perfect choice for the holiday season.

Diary Of A Mad Fashionista
Create a free website or blog at WordPress.com.