I am beside myself! Judge Sonia Sotomayor has been approved by the Senate Judiciary Committee for the Supreme Court! Not only is she a perfect candidate, she is a beautiful plus-size female!

Oh, yes, and she is Latina as well. In my excitement I forgot that for a moment. Below is an excerpt from an article from today’s USA Today.

WASHINGTON — The Senate Judiciary Committee approved Supreme Court nominee Sonia Sotomayor by a 13-6 vote Tuesday,
along almost perfect partisan lines and after two hours of debate.
All Democrats voted for Sotomayor, President Obama’s first nominee to
the high court. All Republicans except Lindsey Graham of South Carolina, opposed. The nomination of Sotomayor, a 17-year veteran of the federal bench, now goes to the full Senate for a vote. That is likely to be held the week of Aug. 3, just before the Senate leaves for its summer recess.

Graham said he was backing Sotomayor partly because he believed President Obama, having won last November’s election, deserved wide latitude to make appointments within the judicial mainstream.
Graham deemed Sotomayor “well qualified,” of “good character” and within “the mainstream.” Sotomayor would be the first Latina justice in U.S. history. “Now that’s a big deal,” Graham said.

And to his fellow conservative Republicans, Graham added, “She can be no worse than Souter, from our point of view.” Newly retired Justice David Souter, whom Sotomayor would succeed, was named by the first
President Bush in 1990 yet became a reliable vote for the liberal wing.

Democrats currently control 60 of the 100 votes in the Senate, and an easy majority vote for Sotomayor is not in doubt. Sotomayor, who would become the 111th justice in history, would be the third woman ever appointed and the second current female justice. Justice Ruth
Bader Ginsburg is presently the only female on the nine-member high
court.

Must dash to the phones–I am certain a woman in that position needs a stylist, and I am that stylist!

Once again, get your minds out of the gutter! (Besides, the mental image is…um, how do I say this politely…disturbing.)

The speech Sarah Palin gave the other day was widely considered (rightly) to be incoherent, so the wonderful Conan O’Brien asked the immortal thespian and Priceline.com spokesman William Shatner to read it as a poem:

It is just under two minutes of sheer brilliance, mon cher lecteurs. Bask in the magnificence that is all things Shatner.

This morning I was idly watching Revolutionary Road, starring Leonardo DiCaprio, Kate Winslet and Kathy Bates. Very dramatic, set in the mid-1950s. As I watched the crowds of men in identical fedoras and suits, I suddenly thought of my friend Sheri Lane, who runs Matinee New York. She specializes in men’s vintage clothing. I placed a call, and to my non-surprise, it turned out that Sheri indeed had quite a few items in the film, some on Mr. DiCaprio himself.
Matinee New York has supplied vintage clothing for, among other films, American Gangster, When In Rome, The Good Sheperd, Che, Semi Pro, The Secret Life of Bees, Doubt and the upcoming Taking Woodstock. Broadway shows include Frost/Nixon and Absurd Person Singular.

Matinee New York specializes in clothing from the 1930s to the 1970s, although they do have other eras. I have been fortunate enough to share a booth with Ms. Lane at two Manhattan Vintage Shows, and her wares are among the best and most unique I have seen. She also sells to private individuals by appointment. Here is the link to her website, which is also on the right under “Vintage Links”
http://www.vintagecoolclothes.com/
So if one of my dear readers is a film or stage producer working on a project, do keep Matinee New York in mind.
Unless your star is Kathy Bates, Queen Latifah or Jordin Sparks. Then, my dears, you need moi.
Ciao,
Elisa & Bucky the Wonderdog

The title does not mean what you might think.

Rarely do I have other people provide the content of my blog, but I simply could not resist this cartoon from another (ugh) Ebay seller: 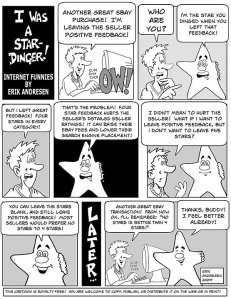 What a talented fellow, and a valuable message to boot!

As we all know, Project Runway returns to the airwaves late in August. And then we can officially forget The Fashion Show ever existed. Sorry, Isaac, but indifference is the new black.

However, Internet chatter has it that the week before the actual “lost” season airs, Project Runway will have an All-Star Challenge, with my utterly adorable Chris March! I am beside myself, dahlings. The man can do no wrong in my eyes.

Also returning will be the immortal Santino, who I am sure will be doing his amazing Tim Gunn imitation at the drop of a fedora. Apparently Christian Siriano and Laura Bennett declined to return. Their loss, say I.

Your faithful correspondent does not know how the challenge will work yet, but will keep my professional snoop’s nose to the ground (I’d do it myself but I don’t like bending over. It’s so undignified). In the meantime, here’s a challenge for you: who is more airbrushed in this picture?

This will have to be short, as I am preparing to go out to a dinner party in Southampton.

However, I am still taking suggestions on my plans for world domination. Of course further plans include:

1) Find a cure for cancer (again, any well-informed World Leader has to pledge that)

2) Making it a rule of law that ALL clothing manufacturers and designers–and I do mean ALL–have to provide their clothing in sizes up to 7X! Yes, I’m looking at you, Banana Republic.

Must dash! Please do follow me on Twitter, help my plans for world domination, and remember, BIG GALS RULE!

I confess. I have become rather a fan of Twitter, if not of most of its users. Do I really need to know someone feels bad because they broke their diet because they ate some gnocchi? At first, the 140 character length left something to be desired. Such as intelligence. But soon I learned that brevity is levity when one works on it. And now, through sheer grit and determination, I have as of today 306 followers!

My initial goal was 300 followers, but I want at least 1,000, so that I may plot my plan for world domination. Or at least the domination of a part of the world. Here are some of my promises if I become a World Leader:

1) World peace, because you have to say that first.

2) Recast all of the situation comedies on television that have fat men married to beautiful women, so that fat women are married to handsome young studs. Because, my dear readers, that is how it is in real life far more than you think.

3) Force-feed Megan Fox pastries as if we were stuffing a goose for foie gras. In fact, stuff Ms. Fox with foie gras as well.

4) Ban all diets except those medically mandated. Destroy any and all height/weight charts. Ban all stock footage of heavy people’s midsections used for news footage about obesity.

5) Ban Photoshop on advertising. In fact, perhaps we should ban advertising. (Comments are welcome on this one, dahlings. After all, I would be a most open World Leader.)

6) Legalize same-sex marriage. But I do not care how devoted it is, you cannot marry your dog, cow or parakeet.

7) Ban informercials for colon cleansing, exercise machines, and…oh, let’s simply ban all infomercials. (Comments are welcome if you have a “thing” for the Sham-wow gentleman.)

8) This is going to get a bit complicated, so bear with me:

9) Any suggestions? Please do leave your comments.

If you agree with my plans, please do follow me on Twitter. Together we stand, divided it’s just the same old mess it’s always been.

Diary Of A Mad Fashionista
Create a free website or blog at WordPress.com.